Home > Case Studies > The Credit Crunch and a Small Business: A Case Study

The Credit Crunch and a Small Business: A Case Study 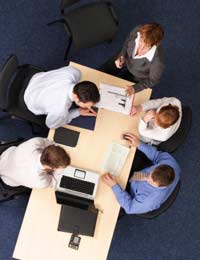 The effects of the so-called 'credit crunch' are now being felt in all corners of the economy. It would appear that virtually no industry is safe from the dangers of the downturn – with the possible exceptions of pawn shops and bailiffs.

The recession is proving disastrous for businesses of every size, with huge corporations resorting to massive lay-offs and small businesses cutting costs wherever possible.

We spoke to a small business in order to get their take on the effects of the recession. This London-based music PR firm which, for obvious reasons, did not wish to be named, has been hit hard by the downturn.

They operate from small offices in North London and have two full-time employees, both of whom are Directors. They specialise in offering PR and marketing services to musicians and record labels.

This company has relatively low overheads; their office space is small, and they received a good fixed rate deal at the beginning of their occupancy. Furthermore, as both a Directors they do not have a large wage bill to contend with; rather, they take money out of the company as dividends – a more tax efficient method.

The downturn has, however, affected this company significantly. As music is a discretionary purchase, sales go down when people have less money to spend. This obviously as a knock-on effect for those offering PR and marketing services. The company have had several large contracts fall through just before work was due to begin, due to a sudden change in their clients' financial situations.

Furthermore, lengthy contracts for which clients were paying on a monthly or quarterly basis have been cut short as a result of the clients' inability to pay.

However, the company is surviving on the remaining contracts that have not been cut. They have realised that independent musicians are less likely to be hit by the effects of the downturn, not least because many are students. As such, they are expanding their marketing efforts towards these individuals, and gradually concentrating less on large record labels.

They are also restructuring their systems to allow them to perform more of their work online. They are installing web-based customer relationship management software which they hope will cut costs and increase productivity.

This particular company looks well-placed to survive the recession, and there are a number of important lessons to be learnt from their conduct. In the first instance, they can be viewed as an interesting illustration of the differences between small businesses and large corporations. Due to the agile nature of their organisation, and their low overheads, they have been able to adapt their business model to shield themselves from exposure and exploit new markets. Large corporations would find this very difficult to do quickly. Furthermore, their intimate knowledge of the market has allowed them to identify new opportunities quickly and effectively.

The downturn is undoubtedly having a devastating effect on small businesses, many of which are shutting up shop. However, this case proves that an efficiently run organisation that gears its services towards the needs of its clients and the realities of the market can survive – and, potentially, flourish.